On August 16th, Berg Seattle, on behalf of the Bergelectric Charitable Foundation, held their First Cornhole Classic at Starfire Sports on the Stadium Field in Tukwilla, WA.  We had a turnout of almost 100 sponsors and staff for this event that raised money for Seattle based non-profit, Freedom Has a Face.

With close to 100 people at the event and 21 custom wrapped Bergelectric cornhole boards, Berg took advantage of the Stadium Field at Starfire Sports which is the same field the Seattle Sounders practice on.  We opened the event with a thank you to all of our sponsors followed by our guest speaker Joe Lachnit Sr. (co-founder of Freedom Has a Face).

Joe gave everyone the background to how and why the charity was founded and how the money from this event would be used.  We have had an incredible response from everyone regarding the tournament’s beneficiary—Freedom Has a Face—and what a unique service they provide. 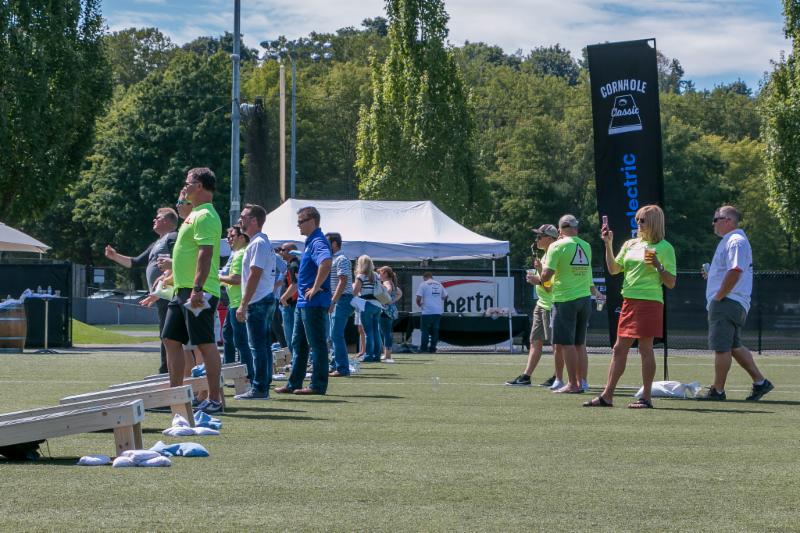 After roughly 4 hrs of tournament play, we had reached our quarterfinal rounds. Austin Cook from Berg’s Seattle office got picked up by our food provider, Cask & Trotter, to form a team that made it to the quarterfinals against Venture. While those 2 had it out, Graybar and Gexpro played their match.

Gexpro and Venture ultimately wound up in the finals with Chris and Sara Giebel from Gexpro taking home the first place win.  First place received a crystal desk trophy as well as 2 tickets to a Mariners game and 4 tickets to a Sounders game that came from our office season ticket program.  Second place prizes were two $50 gift cards to Starbucks donated by Southwire Tools.